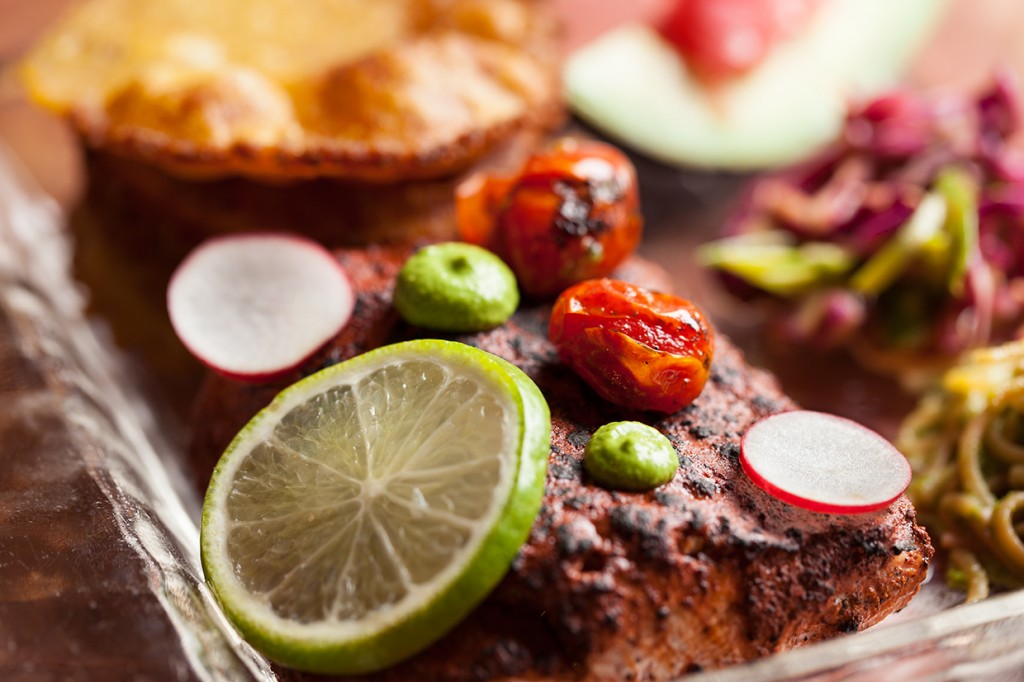 The menu at Xixa is the work of Jason’s fictional twin who grew up in the suburbs of Mexico City. Jason grew up gardening and cooking with mom, learning and falling in the love with the smells, tastes, and techniques of Mexico.

After completing his university studies, he moved to America to pursue professional cooking in New York and California. In between jobs, he was inspired by travels to Southeast Asia, Europe, and the Middle East. While travelling and cooking, Jason not only learned how unique these cuisines were but in many cases how similar. A tajine in Morocco evoked memories of a great mole, the curry pastes of Thailand reminded him of the great recado pastes of the Yucatan, and a simple, roasted kielbasa in Prague made him compare to his beloved chorizo sausage. In contrast, he also fell in love with new flavors, techniques, and ideas.

In Paris, he wondered how the endless varieties of cheese might be incorporated in his native cuisine; how the bright, fresh salads of Vietnam seemed based on the same ingredients that he grew up with

but were composed in ways he’d never seen; and the art of pasta-making throughout Italy made him wonder about his native grains and what he could one day do with them.

Along his journey, Jason met Heather through work, and through inspiration and research, they eventually decided to open Xixa. The food at Xixa will be both decidedly Mexican and not. Mexican recipes will feature non-Mexican ingredients and vice-versa. Jason’s hope is that diners will see Mexican food differently through his eyes: his experiences, memories, and ideas. The goal will be to create a menu of modern Mexican dishes that echo Mexican cuisine: past, present, and future.

While we have been known to enjoy all of these on “several” occasions, we want to explore their essences at Xixa. While each of these drinks is ideally a mixture of many great ingredients, each is based on a particular component, its essence.From the margarita we have tequila and even more fundamental: agave. From the michelada we have beer and as its primarily flavoring agent: hops. And for sangria, we need wine and specifically: grapes. At Xixa our beverage program will feature these three essences: agave based spirits such as mescal, tequila, and sotol; our focused beer list will showcase
a variety of styles exhibiting the often dramatic effect of specific hops and their treatment by brewers on each beer; and the primary focus of Xixa’s beverage program: an extensive wine list featuring 200+ wines which represent grape varietals both loved and lost. The list will also explore the affects of age, place, and winemaker on these grapes offering guests a unique opportunity to explore wine in a perhaps unexpected way and place. 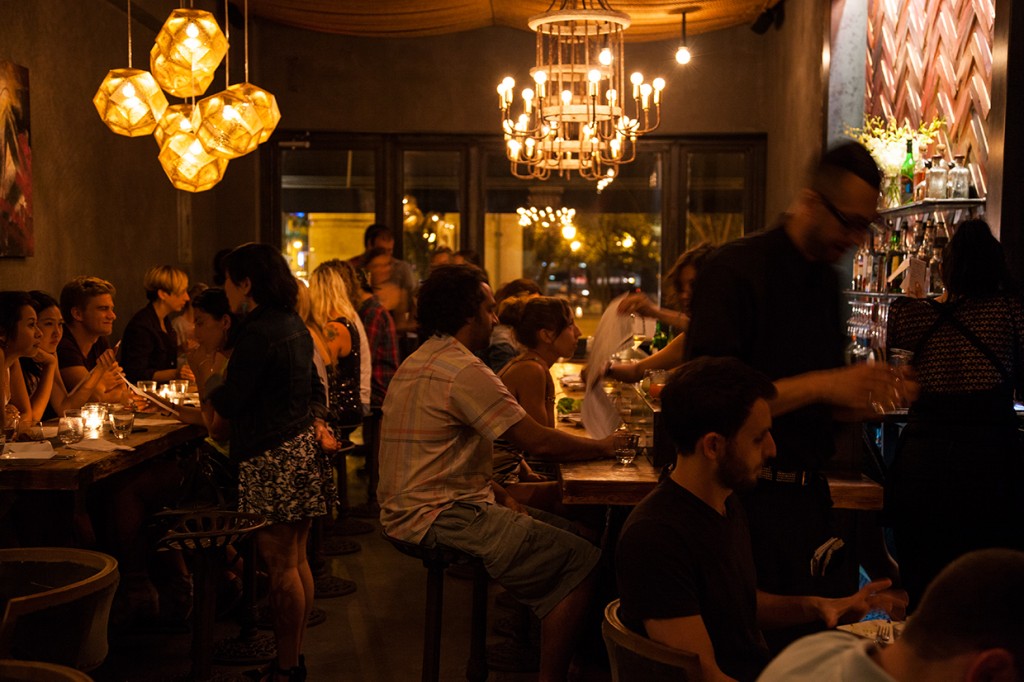 The creation story of Xixa is one of truth and fantasy.

The truth is as follows: Jason Marcus and Heather Heuser met while working in a restaurant in San Diego in 2005. Eventually Jason (a nice jewish guy from Jersey), and Heather ( a nicer non-Jewish girl from New Hampshire) fell in love and decided to travel through Europe, move to New York, and open a restaurant called Traif. Along their travels in Europe they came across a bar in Barcelona called “Xix,” pronounced “chicks” in Catalan. They thought, wouldn’t it be something if we one day had another establishment called “xixa,” pronounced “shiksa” in Spanish in honor of Heather, Jason’s “shiksa,” or non-jewish girlfriend in Yiddish.

Here’s where the fantasy twist to the Traif story begins. So, what if instead of meeting in San Diego, Heather and Jason met in Mexico? What if almost everything else was the same: Jason travelled throughout Europe and Asia, worked in various Michelin kitchens, and grew up gardening and cooking with mom just like in real life… and what if Heather found her passion for service and hospitality while working in major hotels, boutique restaurants, and tiny dive bars…

What if Jason and Heather met in a restaurant in 2005… What if they dreamed of opening a restaurant in their home’s capital featuring the type of foods, beverages, service, and ambiance they loved… but what if this capital was Mexico City? What if Jason (a good Jewish boy from the suburbs of Mexico City—go with it) was enchanted by his non-Jewish girlfriend Heather much like his connection to cooking and they wanted to honor this notion of seduction with their new restaurant—a place where familiar meets foreign, home meets away, and the accepted meets the forbidden? And, what would they call this place?

Xixa is the real answer to this fictional question. At Xixa, Heather and Jason hope to capture this parallel dream of Heather and Jason version Mexico City. The food will be globally inspired but grounded by the flavors, techniques, and memories of a chef whose home lies in the suburbs of Mexico City.

The ambience and service will reflect Heather’s cosmopolitan experiences, but be grounded by an affinity for traditional and modern Mexican aesthetics and culture. The beverage program featuring an extensive wine list, focused tequila/mezcal list, and craft beer list, will reflect Heather and Jason’s desire to showcase the essences of Mexico’s classic drinks: agave, hops, and grapes. As Heather and Jason’s next step, they hope guests will enjoy the familiar concept offered at Traif, but enjoy making the journey with them to a new place, Xixa. 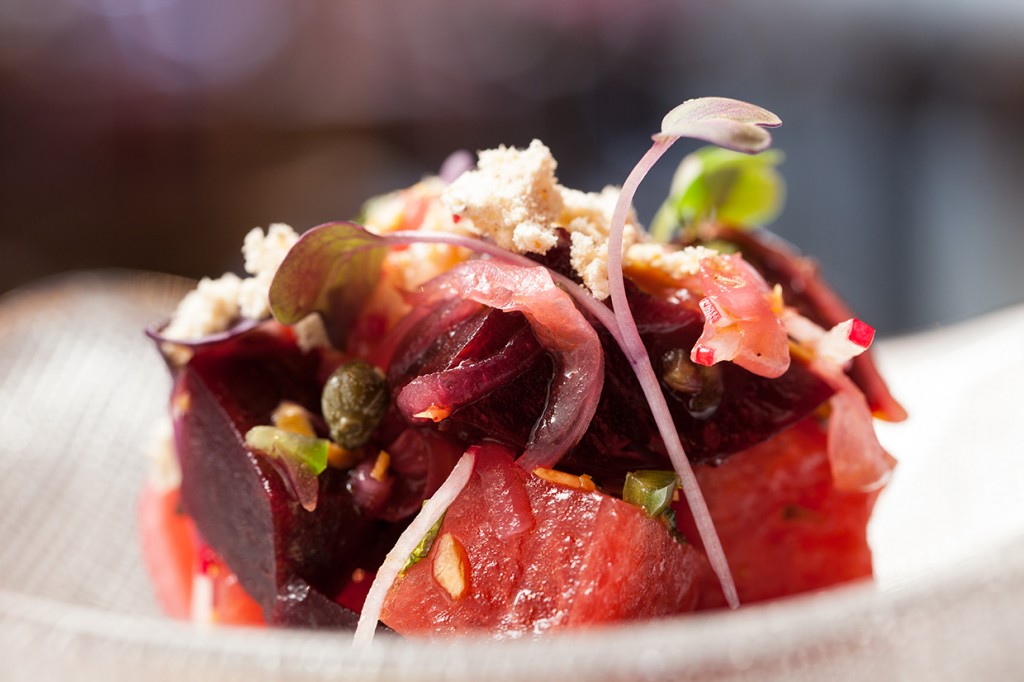 Heather is the shiksa, the muse, and la mujer of Xixa. Xixa, from ambiance to drink to food, is Heather’s dream. In many ways, Xixa is the aesthetic and philosophical ideal of Heather—a strong, feminine, romantic, cosmopolitan, nostalgic, modern woman. The space, filled with sensual textures,treated metals and woods, a unique all-rope ceiling, varied lounge-y seating, and both modern and classic romantic lighting was inspired by Heather’s desire for a restaurant/bar with a decidedly sexy,smart feminine vibe. The food, a blend of mexican flavors/ideas/techniques but with a more global approach, reflects Heather’s desire to honor home but embrace the outside. The beverage program featuring an extensive global wine list, agave-based spirits, and craft beer reflects Heather’s affinity for both purity of ingredients and non-traditional food/beverage pairings.Heather grew up in New Hampshire but always had big city dreams. She entered and the restaurant world in high school and pursued bartending at Pravda and ? in Boston throughout college. She moved to San Diego and was on the opening teams of The W Hotel and Red Pearl Kitchen as general manager where she met future partner Jason. After briefly moving to LA to open Brix restaurant, she moved to NYC with Jason in pursuit of opening their first restaurant, Traif which they opened in April, 2010. Heather’s casual but serious approach to service has helped establish Traif as both a neighborhood and destination favorite. Her vision with Xixa is for a restaurant/bar that reflects the ever-changing Williamsburg southside—a little more grown up and sophisticated, but still casual, young, and edgy.

Jason grew up in New Jersey, the son of foodie parents long before the term foodie was used. He cooked and gardened with mom and listened and watched the greatest gourmand he’s ever known, Dad all leading to the makings of a chef. After studying philosophy in college, Jason decided to pursue his passion professionally. He worked for the best restaurants who would have him in NYC and California, such as Judson Grill, Eleven Madison Park, Le Bernardin, and Manresa. In between jobs, he travelled as much as possible throughout Southeast Asia, Europe, Mexico, and the Middle East. While helping to open Red Pearl Kitchen in San Diego as chef, he met Heather Heuser, general manager. After first working together and building a friendship over two years, they eventually began dating and moved to NYC in hopes of opening a restaurant. That hope led them to Brooklyn to open Traif Restaurant in Williamsburg. Traif has been the recipient of numerous accolades in NY Magazine, Timeout NY, the Michelin Guide, Eater.com, Grubstreet.com, and Zagat. Jason was also a contestant on the Foods Network’s “Chopped.” At Xixa, Heather and Jason’s second restaurant, Jason hopes to explore his love of Mexican food via the eyes of a more globally-seasoned chef creating a recognizable but unique menu.